Is there global warming?

This video is of Senator James Inhofe from Oklahoma; Chairman of the Arms Services Committee and author of the book: “The Greatest Hoax: How the Global Warming Conspiracy Threatens your Future”  https://www.amazon.com/Greatest-Hoax-Warming-Conspiracy-Threatens/dp/1936488493

In this video he is talking on Senate floor about global warming and how “we keep hearing about how 2014 was the warmest year on record” and displays a snowball he made from outside the senate on this February day in Washington, D.C.

As an introductory activity, ask students to discuss the merits and concerns about this senators words and actions as they relate to global warming. In particular, be on the lookout for comments such as:

(As an example, on a day like October 30, 2019, someone located in Colorado or anywhere in the western U.S. might be experiencing very cold weather, while a large fraction of the rest of the earth is experiencing above average temperatures) 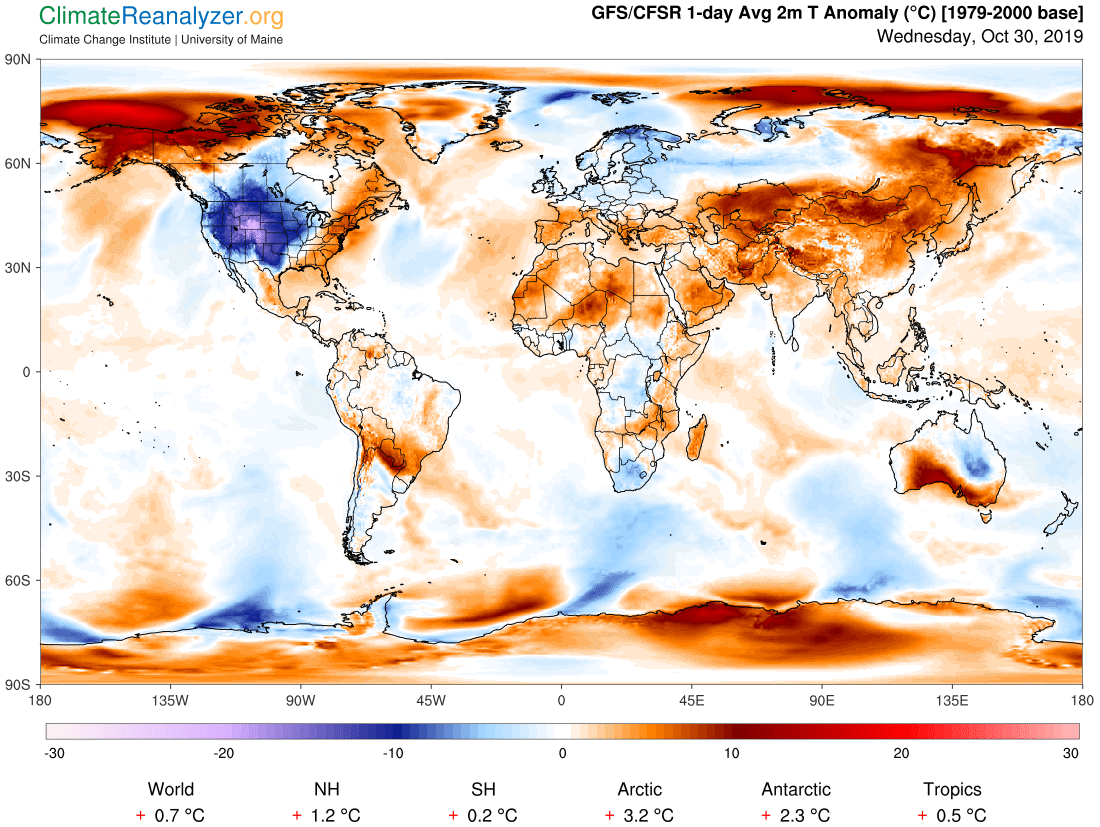 Tell students that they will be preparing their representative to testify before congress.  They have a few weeks to prepare a report for them to use as a basis of their testimony. Ask students to think about what better methods they can use to prove or disprove whether temperatures on the earth have been rising for decades?  Gather ideas.

If they suggest using temperature data for the whole globe, ask “Where should we get the data?”

Look for answers such as “global recognized research centers”, “international agencies”, etc. Suggest NASA as a possibility.  “Would most people trust NASA to provide temperature data representative of planet earth?”

We will use NASA temperature data as a starting point with the hopes to write any analysis code flexible enough to use data from other sources. As a class, Google search:  “NASA air temperature data”.

As a class, browse the top search result:  https://data.giss.nasa.gov/gistemp/

Explain to the students that our analysis will consist of two parts:

Explain to students that: “Our goal will be to try to create a report quantifying (assigning values to) any temperature change and providing numbers and figures demonstrating how these changes relate to the historic record of temperatures.  We will do this by creating visualizations of any information we come up with in our analysis.  (“A picture is worth a thousand words“)

In short, we are going to create a report to congress that we can present as evidence, that will hopefully be more useful to an important decision making body than a snowball.

In the right-hand column of the NASA GISS webpage is a link with title: Station Data

On this page, select stations to look at using the red-dotted locations on the globe map at the bottom of the page.  Use the From: and To: filters to limit the locations so that the page show only those that have recorded data for at least one hundred years.

Try to find a location fairly close to your location with a good long temperature record.  Stations with more than 100 years of data are preferred.  Note any gaps in the records.  These often come at times of global strife (e.g., WWII, etc.) when governments were preoccupied with more pressing matters than taking and preserving temperature data.

Important Note:  Choose a station to analyze that has a period or two of missing data for the following activity.  Including missing data drives home the point that working with data is often messy.  It requires that students consider the ramifications of the missing data when they are creating their code, how the missing information is noted in the record, and how to account for, and visualize, it in any of the analyses we create.

In our first activity, we will

Note:  Urbana, Illinois and Global data are provided to you in a convenient Swift array form at this link: https://buildingrainbows.com/nasa-global-temperature-anomalies/

Activity 1a:  Using the ‘Answers’ template in Swift Playgrounds, write a Swift function to compute an average of a series of data

We did this as a class using the ‘Answers’ template in Swift Playgrounds and came up with the following:

We used this as an opportunity to introduce the for value in inputData { } form of a loop, which is useful if one needs to iterate over an entire loop. In the loop, there is no index created. Instead a variable (in this case ‘value’) is created during each iteration of the loop and can be used in any computations within the loop block.

When we called our function using:

We came up with an answer of about 33°C.

Students compared the answer to what they thought should be the average in a ‘sanity check’.  The eyeball approach suggested an average of 11°C instead of the 33°C.  Something is wrong.  Students quickly identified that the 999.9 values indicating temperatures that were ‘missing’ was fouling up their computation of the average biasing the computed result artificially high.

We worked as a team to refactor our function to account for missing values.  We also made it ‘generic’ in case we used a different dataset someday that used a different value to indicate missing data.  The result was:

As a final test for this function, ask the students to input an empty array into their function call:

The results is a program crash.  Ask the students to step through the code and determine why this happened?  Divide by zero!  (Since the count variable remains at zero in the function).  Again, more refactoring to get:

Activity 1b:  Creating a time series of anomalies

Questions:  In the previous activity, we computed the ‘long-term-average’ of the air temperature time series.

“What would be the best way to determine how an individual year compares to its long-term average?”

Ask students: “What is the expression for computing an anomaly then?”  Answer:  (temperatureValue at some time – longTermMean).

Discuss with students a step-by-step algorithm for computing a series of anomalies from the data.  Create a function that will take an array of Doubles (raw temperatures) and return an array of Doubles (temperature anomalies) with the same number of elements.  Remind the students of the issue with missing values.  Ideally, we would like to preserve the missing values in the anomaly series (I.e., if the actual value is missing, the anomaly should be represented as a missing value, because it cannot be computed.).

Students should work in teams of 2-3 to create a function that returns an array of anomalies.

Go over the solution together.  Something like the following will work, but there are many possible solutions:

Summary Activity:  Review the idea of a mean and an anomaly as a departure from a mean.  Have a short discussion and ask any volunteers to discuss the following:

“How are you personally an anomaly?  In what ways are you different than the ‘norm’.”

Part 2 of this Swift Data Science series of lessons: Building a case